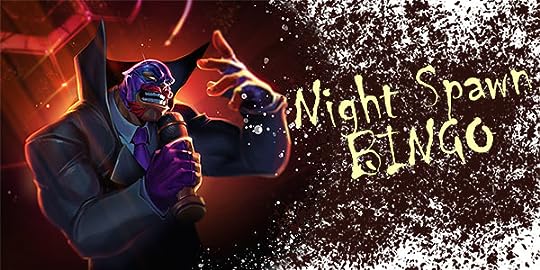 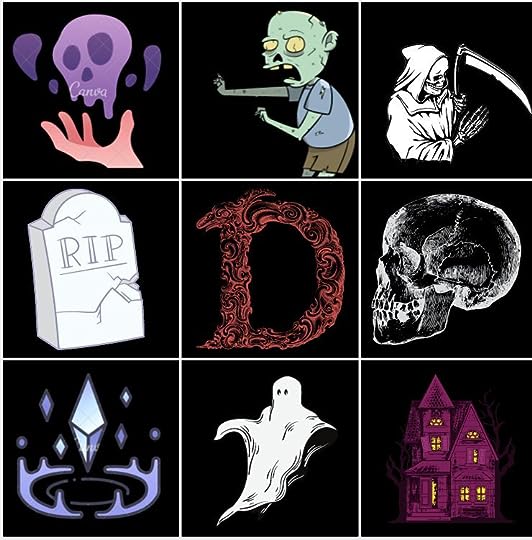 Welcome to Night Spawn BINGO. Each month a new BINGO game will be posted with new tasks to complete. Get three in a row (Horizontal, Vertical, or Diagonal) to receive your Vampire Heart.

Rules:
Complete three tasks to get the vampire heart
All genres welcome
Rereads welcome
No minimum page count
One book per task

Read 3 books that have one of the following (Must be in a Horizontal, Vertical, or Diagonal pattern).

MC is a Necromancer~
MC is an Undead Character (Zombie, Vampire)~
MC is a Grim Reaper 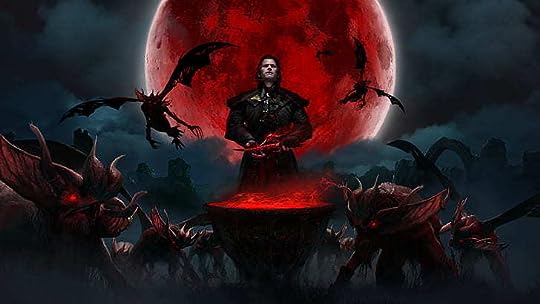 Collect a Funko Vamp each month by completing at least 2 tasks from a set of 6.
A new set of tasks with a new Funko Vamp will be posted each month.

The dolls you collect will be in your Vampire Heart thread. Don’t have a thread? You can still do the challenge if you want 🙂

How It Works
Ten books each month is a lot, so there will be 5 different levels. Pick which level you want to do and that’s how many items you will need to check off.

3. July’s birth stone was turquoise or onyx from the 15th to 20th Centuries, but is now ruby or carnelian:
read a book with a blue or black cover (or both) OR read a book with a red cover – Happy Trail by Daisy Prescott

4. July’s flowers are delphinium, larkspur, and water lily:
read a book with the letters F L O W E R in the title and/or author’s name OR read a book with a character who lives in or near a body of water – Driftwood Cottage by Sherryl Woods

7. 7/1/1903 marked the start of the first Tour de France bicycle race:
read a set in France or written by a French author OR read a book with the word “bicycle” or “bike” or “cycle” in the text

8. On 7/1/1983 Buckminster Fuller died. He was an American architect, designer of the Montreal Biosphère, developer of the geodesic dome:
read a book tagged Science Fiction or Futuristic OR read a book with an architect or engineer or construction worker MC

9. On 7/1/1997, China resumed sovereignty over Hong Kong:
read a book set in China or Hong Kong OR read a book tagged historical

10. On 7/1/2013 Charles Foley died. He was an American game designer and co-created Twister:
read a book with at least one circle on the cover OR read a book with a twisted plot or character

BONUS: read any book published in July of any year

Are you afraid of what lies beneath?
Afraid of the things that stand in the darkness, watching you.
The things that keep you up at night…..

Gather round the fire and share tales of terror with your friends to see who is really afraid of the dark.

The Tale of the Phantom Cab
Two brothers who often fight with each other get lost in the woods, and come across a mysterious cab driver named Flynn. He leads the two boys to an unusual man named Dr. Vink to help them find their way out. The catch is that Vink will not help any of his guests until they solve one of his riddles. Failure to do so results in undesired consequences.
1. Read a book with brothers in the plot – A Chesapeake Shores Christmas by Sherryl Woods
2. Read a book where the MC gets lost
3. Read a book where a character takes a cab/Uber or something similar
4. Read a book where the MC works in the medical profession

The Tale of the Lonely Ghost
Amanda is stuck spending time at her aunt’s house, and desperately wants to be friends with her snotty cousin Beth. She agrees to spend the night in the haunted house next door to become part of her group of friends. She soon finds out that the story regarding the “haunted” house may actually be true with a living connection close by.
1. Read a book tagged ghost(s) on the first page of tags
2. Read a book where a character can see or talk to ghosts
3. Read a book with a scary or haunted looking building/house on the cover
4. Read a book where a character wants to fit it with other people – Happy Trail by Daisy Prescott

The Tale of Laughing in the Dark
Josh decides to prove that an amusement park fun house isn’t haunted by stealing the nose from a prop of Zeebo the clown. Zeebo was a corrupt circus clown who died in a funhouse fire while escaping from the police after stealing money. Josh soon learns that the story is indeed true when Zeebo’s ghost visits him demanding his nose back.
1. Read a book with an MPG of funny/humor or something similar – The Girlfriend’s Guide to Pregnancy by Vicki Iovine
2. Read a book where a building is set on fire during the book
3. Read a book with the word “clown” in the text
4. Read a book where the MC steals something or is running from the police

The Tale of the Twisted Claw
In a twist on the classic story “The Monkey’s Paw”, two boys play a mean trick on an old lady the night before Halloween. The next night the boys return for trick or treating “disguised” in costumes, but rather than candy she gives them a wooden vulture’s claw. She tells the boys that this “gift” grants wishes warning them to “be careful what they wish for”. The two boys start making wishes with unintended terrifying consequences.
1. Read a book where a character celebrates Halloween
2. Read a book with a claw(s) or claw marks on the cover
3. Read a book a boy plays an important role in the book – Promise Canyon by Robyn Carr
4. Read a book tagged horror or thriller

The Tale of the Captured Souls
A girl and her two parents move into a lakeside rented room for the summer where they befriend the young property owner Peter. Strangely the residence is full of mirrors that the owner cites as a “hobby”, and even stranger the parents start feeling weaker by the day. However when the girl discovers the young owner’s plot to take away her parents’ youth to keep himself young using a device connected to the mirror and make her as his mate, she has to stop him before it’s too late.
1. Read a book set during the summer – Wild Man Creek by Robyn Carr
2. Read a book with a mirror on the cover
3. Read a book where a character has an ability to stay young
4. Read a book with a true or fated mate

The Tale of the Nightly Neighbors
A new family moves into Emma’s neighborhood. They are originally from Eastern Europe, wear black, collect blood, and are only active at night.
1. Read a book where the MC moves – Driftwood Cottage by Sherryl Woods
2. Read a book with a vampire
3. Read a book set in Europe
4. Read a book where a character is active mostly at night

The Tale of the Midnight Madness
Dr. Vink helps a struggling movie theater gain more patrons with a copy of the classic vampire film, Nosferatu, but when Dr. Vink gets cheated out of his money in saving the theater, he curses the famous movie monster to step out of the movie and haunt the theater, and it’s up to two teenaged ushers to break the curse.
1. Read a book where the MC watches a movie
2. Read a book with a curse in it
3. Read a book with a monster in it
4. Read a book with the word midnight in the title

There are 3 tasks, you only need to read three books to finish this challenge. Or pick one task and read 3 books for that one task.

July 30 is International Friendship Day, so why not celebrate — and get to know a bit more about — our Goodreads friends?

Go to your Goodreads friends list, then complete the tasks as directed below. It will require sorting in a number of different ways, possibly some ways you never noticed before 🙂

1. Read a book by an author whose first or last initial appears in the name of the friend you most recently added; tell us the friend’s name and post a link to the author’s GR page (Bekele Hall)

2. Read a book whose page total includes at least one number from your number of friends; tell us how many pages and how many GR friends you have (74) – Driftwood Cottage by Sherryl Woods (376 pp.)

3. Click on the letter that your first name begins with (can use your real name or your screen name). Read a book from any shelf of one of the friends on that list; tell us the friend and the shelf on which you found the book (Slavia mafia clan)
NOTE : If you have no GR friends whose names begin with the same letter as yours, go to the next letter in the alphabet; continue as needed.

4. Sort by “last status.” Read a book whose title begins with a letter in the first name on your list (disregard A, An and The in the book title); tell us the friend’s name (John Kerry) – Happy Trail by Daisy Prescott

5. Sort by “date added” and scroll to the last name on the list (will be the first GR friend you added). Read a book originally published in the year you added that friend; tell us the year and the friend (2016)

6. Sort by “books added” and find the friend who has the most books on their shelf (should be the first name on the list). Read a book whose ISBN number contains at least two numbers from their total books; tell us the friend, the number of books on their shelf and your book’s ISBN (54,929) – A Chesapeake Shores Christmas by Sherryl Woods

7. Sort by “number of friends” and use the first name on the list. Read a book whose average GR rating contains at least one number from that person’s number of GR friends; tell us the rating, the friend’s name and their number of friends (5,091) – Promise Canyon by Robyn Carr (4.11 stars)

CHALLENGE RULES :
See this thread for more detailed rules for all CCC challenges.
PLEASE NOTE : When we ask for an item shown prominently on the cover, we should be able to see the item in the thumbnail, without having to click through to the book’s page.

♦ If you want to participate in this challenge, please sign up by posting at least a partial list of the challenge requirements. This gives us a post to link you to, which you can use to update your books as the challenge progresses.

♦ Unless otherwise noted, books must be at least 150 pages long. (See the link above for rules regarding graphic novels. Please remember that ONLY graphic novels can be combined.) Books may only be used for one task in this challenge, but cross-challenge posting is encouraged 🙂 Re-reads are allowed, as long as you read the entire book. If you listen to an audiobook, please be sure that the link you post indicates a page count for the book, even if that means linking to an edition different from the one you listened to.

♦ When you complete the challenge, please copy and paste your entire list as a new message at the end of the challenge thread. If you do this while you still have the Edit window open, it will copy all of your links and formatting. If you don’t repost your list, with appropriate links, your name will not be added to the list of those who have completed the challenge. Please do NOT simply post a link back to your original post.

the world has ended oh noes!