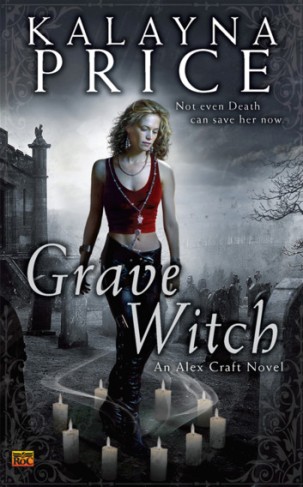 Grave witch Alex Craft can speak to the dead, but that doesn’t mean she likes what they have to say.

As a private investigator and consultant for the police, Alex Craft has seen a lot of dark magic. But even though she’s on good terms with Death himself – who happens to look fantastic in jeans – nothing has prepared her for her latest case. Alex is investigating a high-profile murder when she’s attacked by the “shade” she’s raising, which should be impossible. To top off ehr day, someone makes a serious attempt on her life, but Death saves her. Guess he likes having her around…

To solve this case Alex will have to team up with tough homicide detective Falin Andrews. Falin seems to be hiding something – though it’s certainly not his dislike of Alex. But Alex knows she needs his help to navigate the tangled webs of mortal and paranormal politics, and to track down a killer who wields a magic so malevolent, it may cost Alex her life… and her soul.

I need to start this by saying that my sister and I have now read this book so many times that my version is starting to lose it’s cover. That is the level of obsession that I have had with Grave Witch and Alex Craft since I first found it about five years ago. It has moved across all seven houses with me. And as much as I want to get a new copy, there is something wonderful about still having the first copy that both my sister and I have so completely loved.

There are a number of reasons that I love this series, and everytime I read one of the novels, I found a few more reasons to add to the list. But something that really struck me with this read through was the fact that Alex is broke. She is surviving off crappy food, and struggling with emotions and is just having an incredibly human existence. There is a constant battle for survival and money that most other stories I read don’t have. And yes, sometimes finances get in the way of a good story, but it’s a little frustrating to constantly read stories about people who don’t have to worry about where their next meal comes from. It just helps to make Alex all that much more realistic and relatable. At least for me, a PhD student with a book-shopping problem.

I also love the love triangle that starts in Grave Witch. It is organic, and confusing, and it’s really hard to decide which character I want Alex to end up with more. But it’s not annoying and angsty. It doesn’t involve the lead female half leading either of the men on and although there is a bit of steaminess in each relationship, it’s not overbearingly so. And even though I’ve read the next two books before, I can’t wait to see how this relationship unfolds all over again!