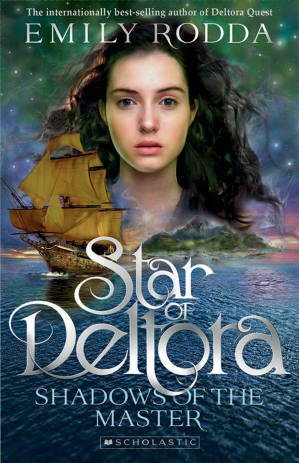 Title: Shadows of the Master
Author: Emily Rodda
Series: Star of Deltora #1
Rating Out of 5: 4 (Really good read!)
My Bookshelves: Australian authors, Easy reading, Medieval fantasy
Pace: Slow
Format: Novel
Publisher: Omnibus Books
Year: 2015
5th sentence, 74th page: As the Trader Rosalyn Apprentice I would be taught by the best, and would gain experience that I could not hope to gain any other way.

Britta has always wanted to be a trader like her father, sailing the nine seas and bringing precious cargo home to Del harbour. Her dreams seemed safe until her father’s quest to find the fabled Staff of Tier ended in blood and horror. Now his shamed family is in hiding, and his ship, the Star of Deltora, belongs to the powerful Rosalyn fleet. But Britta’s ambition burns as fiercely as ever. When she suddenly gets the chance to win back her future she knows she has to take it – whatever the cost.

She has no idea that shadows from a distant, haunted isle are watching her every move.

I keep looking at this book and thinking that I need to read it. And then getting distracted by something else. Because, well, I’m a goldfish. But I finally picked this up. And then promptly read it page to page before putting it back down. I didn’t even need a bookmark to have a pause halfway through.

Shadows of the Master might return to my beloved world of Deltora, but it is into an entirely different world that you are thrown. Actually, I’m still trying to figure out when within Lief’s reign this story takes place. There is a mention of Barda, so I’m sure it’s when they are still alive… I love that this is a storyline that takes place in a world that is already familiar, but its own subset location that I’ve had almost no experience with. Plus, the idea of traders and pirates and the seven seas is incredibly thrilling. This tale may not include much of that yet, but it does set everything up perfectly for the next three books, and a swashbuckling set of tales.