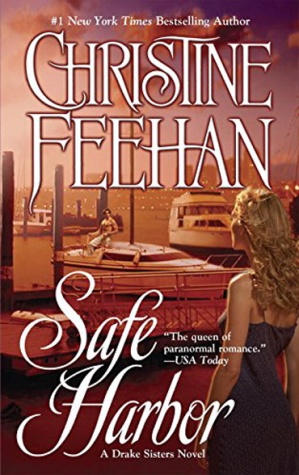 Title: Safe Harbor
Author: Christine Feehan
Series: Drake Sisters #5, Sea Haven #5
Rating Out of 5: 5 (I will read this again and again and again)
My Bookshelves: The Coast, Family, Magic, Paranormal romance
Pace: Fast
Format: Novel
Publisher: Jove
Year: 2007
5th sentence, 74th page: The cameras jumped from inside the show to outside, wheree a crowd pushed along the sidewalk hoping to catch a glimpse of one of the celebrities.

One of seven daughters in a line of extraordinary women, Hannah Drake has been the elusive object of affection for Jonas Harrington for as long as the rugged sheriff can remember. It only the stunning supermodel was driven by a passion other than her career. But Jonas isn’t the only one with desires for Hannah.

From the shadows has emerged a vengeful figure who stalks the beauty with one terrifying purpose: to strip her of all she is and destroy her. Only one man was destined as her protector. Now, out of a storm of danger, Jonas must guide the woman he loves from a sinister darkness that threatens not only Hannah, but the entire Drake family.

I’ve been waiting for Hannah and Jonas’ story since I first read Magic in the Wind. It was obvious from the get-go that they were meant to be together, and I absolutely loved both characters. So I simply devoured this book.

Unlike the rest of the Drake Sisters stories, Jonas and Hannah get together very quickly and have their first couple moment. Which makes sense, because the work up to their relationship has really gone on throughout the first four books. But, since this is a whole novel and there needs to be something that comes between them, it so quickly turns badly. Hannah’s attack is so unlike the rest of the trials that the sisters have to face. And I loved it because although it comes between the lead couple, it doesn’t come between their love – just the ways in which they have to deal with one another.

Although Hannah is a supermodel, she is always described as homely and loving by the rest of the sisters. The fact that this is how she wants to be – a homely, motherly figure is kind of fun. It’s a great reminder that although women get to be strong and independent, it’s also okay to want to stay at home and be a mother and wife. Jonas’ love of and acceptance of her just makes this all the more sweet. But, ultimately it’s the way that he is able to see the true her when even her sisters can’t that just made my heart melt. I’m loving every single couple in the Drake Sisters series, but these two hold a special place in my literary heart.