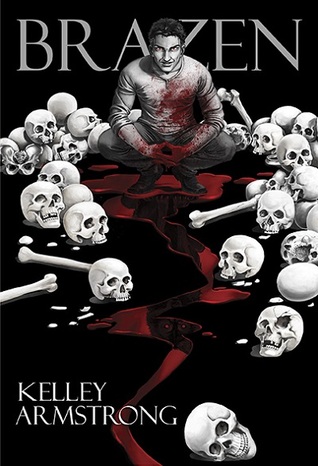 Title: Brazen
Author: Kelley Armstrong
Series: Women of the Otherworld #13.3
In: Otherworld Chills (Kelley Armstrong)
Rating Out of 5: 4.5 (Amazing, but not quite perfect)
My Bookshelves: Dark fantasy, Paranormal fantasy, Strong women
Pace: Fast
Format: Novella
Publisher: Orbit
Year: 2016
5th sentence, 74th page: Nick looked toward the window, where he could pick up the distant wail of a siren.

Nick Sorrentino knows everyone in the supernatural world considers him the Pack’s playboy, the pretty but not very useful werewolf whose only reputation involves his amorous exploits.

Usually, Nick couldn’t care less what anyone outside the Pack thinks of him. But when it affects his hunt for Malcolm Danvers, a psychotic bogeyman from the Pack’s past, it matters.

Necessity forces Nick to team up with mercenary half-demon Vanessa Callas to run Malcolm to ground in Detroit. Together, they discover Malcolm is more deadly than ever. And he wants to play.

It’s time for Nick to prove he’s not just a lover.

Malcolm’s existence and survival in 13 was a bit of a shock – after all, I’ve spent the entire Women of the Otherworld series believing that he was killed. As did the remainder of the characters. So, it was nice to get a bit of an update as to how the werewolf Pack were dealing with his ability to survive almost anything. The fact that Brazen is a tale about Nick and his pursuit of Malcolm (as well as his new standing and responsibility in the Pack) just made this a far more enjoyable novella.

I love that every character in this series has their own perfect match. Mostly it’s unconventional, not quite what you expect, but it works. And, FINALLY, Nick meets his perfect match. She’s not what I would have expected, it’s not the meet cute you would expect, but it works out well. It would certainly be difficult to accept Nick’s playboy past, but Vanessa somehow manages to do it and I love the not-so-tactful way in which she does this.

Malcolm is the boogeyman of the werewolf world – he is kind of intimidating and overwhelming and a sadistic a-hole. The depth to which this sadism and horror has expanded whilst in Cabal custody has only expanded, and it makes him an amazing villain throughout this story. And by amazing, I mean really intimidating and terrifying, and kind of difficult to read this tale late at night.

The bounty hunters throughout highlight our inclination to negatively reflect on the more ‘animalistic’ sides of our nature. I love that through all of the Women of the Otherworld series, the werewolves are considered to be lesser in so many ways. Not just brutish and driven by impulses, but also unable to control themselves. This prejudice against following one’s ‘emotions’ (animalistic nature) causes them to be cast as the ‘other’, and worthy of hunting. Seeing it from the point of view of Nick and the rest of the Pack makes me understand how minority groups that are undertrod can possibly feel.