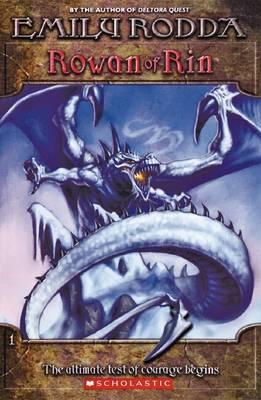 Bravest heart will carry on when sleep is death, and hope is gone.

Rowan doesn’t believe he has a brave heart. But when the river that supports his village of Rin runs dry, he must join a dangerous journey to its source in the forbidden Mountain. To save Rin, Rowan and his companions must conquer not only the Mountain’s many tricks, but also the fierce dragon that lives at its peak.

Fear is a good thing. I’ve always been told it tells us we’re alive. But, really, it also is a way to keep us alive. Yet, for the people of Rin, fear is shameful and courage is the leader of the day. Which is why I love the irony of the most fearful boy of the village being the hero of this story. After all, the very thing that they all take pride in is the thing that unravels them all.

Rowan of Rin is your typical misfit story. A young boy in a village that he truly doesn’t fit in. Struggling to figure out what his place is in the world. And just generally feeling insufficient and confused. Which really, we have all felt at one stage in our lives. The added complication of a heroic dead father, a possible new romance for his mother and the fact that no one quite wants him around just helps to compound the struggles that Rowan is forced to face. And makes his eventual triumph all the sweeter.

I love poetry – it is a great way to give a double sided meaning to the words that we use. And the riddles that Rodda employs throughout Rowan’s journey up the mountain are both wonderfully similar, and intricately difficult to decipher. After all, everything in them comes true, just not in the way that you’d expect. There’s something ridiculously enjoyable about sitting there, trying to guess what’s going to happen next from a few lyrical lines. And, as often as not, kind of guessing what is about to happen, but not being able to entirely predict the next move. After all, if you could guess everything that is going to happen, what would be the fun in that?