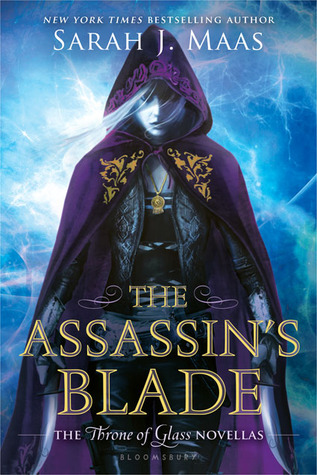 Title: The Assassin and the Healer
Author: Sarah J. Maas
Series: Throne of Glass #0.2
In: The Assassin’s Blade (Sarah J. Maas)
Rating Out of 5: 4.5 (Amazing, but not quite perfect)
My Bookshelves: Fantasy, Romance, Strong women
Pace: Medium
Format: Novella
Publisher: Bloomsbury
Year: 2012
5th sentence, 74th page: Yet there, deep in her gut, was a small but insistent tug.

Meet the Assassin: beautiful, defiant, destined for greatness. Celaena Sardothien has challenged her master. Now she must pay the price. Her journey to the Red Desert will be an arduous one, but it may change the fate of her cursed world forever…

Although The Assassin and the Healer is a short story between Celaena’s adventures (literally), it helps to further her character development and cast shadows across her relationship with Arobynn. Her willingness to do what is right, and even to suffer the punishment for this (as she is now doing after her actions in The Assassin and the Pirate Lord) shine throughout the story. Even amidst the loathing and self-righteousness she feels at her self-imposed exile.

Yrenne Tower also appears, albeit allusively in later stories, and it is the one small act of kindness which Celaena performs in this short story which leads to her future actions. Likewise, this story is a reminder of the lack of power which the women in this society often hold. Their inability to find their own reality and fight for themselves in an often cruel world. The Healer’s ability to finally stand up and fight for herself shows a mass of gumption and inner strength that not only helps her find her own way in life, but is also what inspires Celaena to act on her behalf.

3 thoughts on “The Assassin and the Healer by Sarah J. Maas”