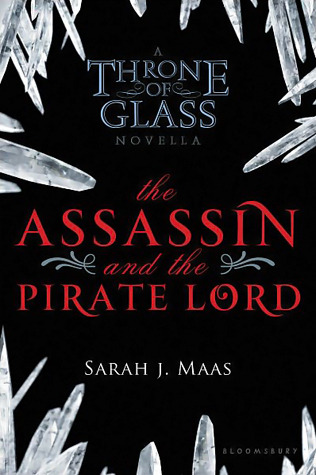 Title: The Assassin and the Pirate Lord
Author: Sarah J. Maas
Series: Throne of Glass #0.1
In: The Assassin’s Blade (Sarah J. Maas)
Rating Out of 5: 4.5 (Amazing, but not quite perfect)
My Bookshelves: Fantasy, Romance, Strong women
Pace: Medium
Format: Novella
Publisher: Bloomsbury
Year: 2012
5th sentence, 74th page: Roalfe croaked as she held it up in her free hand, the garnet flashing in the light.

On a remote island in a tropical sea, Celaena Sardothien, feared assassin, has come for retribution. She’s been sent by the Assassin’s Guild to collect on a debt they are owed by the Lord of the Pirates. But when Celaena learns that the agreed payment is not in money, but in slaves, her mission suddenly changes—and she will risk everything to right the wrong she’s been sent to bring about.

This short story shows two aspects to Celaena as such was before the beginning of Throne of Glass. And, whilst they are so at odds with one another, they are a great insight into the woman she slowly becomes throughout the rest of the Throne of Glass series. The spoilt, petulant child that she is at the beginning of the series is completely offset by the even more self-centred and indulged child that she is in this first prequel.

The first chapter of this novella is exactly how I pictured Celaena in her days as “the world’s greatest assassin”. She is rude, conceited and incredibly difficult to like. In fact, if I hadn’t read the first three Throne of Glass books, I probably would have wondered what this young character had going for her. However, as the story progresses and her care for others is heightened, you can see where he consciousness started to affect the rest of her life. Without that, she wouldn’t have been able to fall for Sam, get caught by Arobynn. In other words, this was the perfect catalyst story for everything that follows.

3 thoughts on “The Assassin and the Pirate Lord by Sarah J. Maas”