Although there is still an epic battle with vampires to complete this story (like the first two novels in this series), most of the story doesn’t actually involve an arch nemesis or vampires in any significant way. It is about the internal battle and war that Justice must fight with himself to survive and become whole again. And I really enjoyed this change of pace. I tend to find I jump from series to series because there becomes a certain same-same in the battles that the characters are fighting, by having an internal demon as opposed to an external, Day was able to mix it up enough that I don’t yet want to put this series down in preference for another (I’ve had to because I haven’t received Atlantis Unmasked yet, but I digress…) 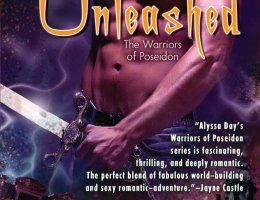 I was expecting a novella featuring one of the Seven Warriors that are the focal point of the Warriors of Poseidon series. So it was a somewhat pleasant surprise to read a novella about one of the sisters – and a healer who is the leader of a temple. Alright, there was still an incredibly dominant and pushy male taking centre stage, but I enjoyed the fact that the Atlantean was female this time.

I have a weird relationship with the Warriors of Poseidon series… while I’m reading them I don’t think that I’m completely enthralled, yet, I tend to just rip through them quickly and fall madly in love with the characters in the storyline. And, when I close the final page of the book, I can’t stop thinking about the storyline and all that unfolded.

I loved Bastien’s romance. It features shapeshifters, passion and temptation. There’s also this great idea that although Riley and Conlan’s romance is the first in the series, Bastien met his soulmate a long time before Conlan did. It just took longer for the two to connect and find their way to each other.