Everything about this anthology made me happy. Although one novella wasn’t in a series that I’ve read before, they’re all by authors on my shelves that I genuinely enjoy. All four tales were steamy and yummy. They had great aspects of the paranormal in them. And, most importantly, each and every one of these tales can easily be read alone, even if you have no idea about the rest of the series.

Reading this was like a great walk through a familiar neighbourhood. Knight, Davidson, and Sunny’s series represented in this anthology are in my shelves, ready to go. In fact, reading these novellas bumped those books up my TBR. And even Kantra’s tale has another novella sitting on my shelves ready to go. And it acted as a reminder to finish another series by her that I’ve begun.

I seriously adored this collection of four novellas. They were perfect read on my kobo late at night when I wasn’t really ready to do the whole going to sleep thing. Long enough to enthral me, but short enough that I could start and finish them right before falling asleep. A great anthology, one that I will most definitely look forward to reading again and again.

I love that this takes place after Mona Lisa’s adventures in the first book. It did give me a lot for spoilers but considering this is probably a bit more emotionally and exotically intense than I’m used to, it’s not a bad thing. I love how Mona Lisa is constantly thankful for the two men that she’s in love with and wanting.

This novella takes place in a transitional phase on Mona Lisa’s life. One that highlights how drastically her life changes in such a short period of time. That it uses her very special healing gifts and highlights the complexities in her many relationships just makes me love it even more. In fact, I got so involved in the storyline that I read this beginning to end in one sitting. And managed to walk into a wall while doing it.

I really loved this novella and now look forward to, more than ever reading Mona Lisa Awakening. I should probably finish the books that I’m currently halfway through first though…

Title: Mona Lisa Betwining
Author: Sunny
Series: Monere: Children of the Moon #2.5
In: On the Prowl (Patricia Briggs)
Rating Out of 5: 4.5 (Amazing, but not quite perfect)
My Bookshelves: Dark fantasy, Paranormal romance
Pace: Fast
Format: Novella
Publisher: Berkley
Year: 2007
5th sentence, 74th page: Or even by Blaec, Halcyon’s father, though he had been the tool in sending them on to the final darkness.

Among the children of the moon, Mona Lisa is of Mixed Blood- part Monere, part human, and destined to be alone. Then she meets a man who could be her salvation- or her downfall.

This novella sends goosebumps running up my arms – the raw sensuality of the words is enough to make you glance sneakily around for an audience. But the emotive descriptions of the night, the moon and the forests add to this heightened sense of reality which Sunny is able to so effortlessly create. This heady combination left me speechless and dreamy for a long time after finishing this novella – something that is incredibly difficult, believe me!

Mona Lisa’s grief and confusion at her feelings, lovers and new role in life are so tangible throughout the story. And it is Dontaine who appears to bear the brunt of her negativity – a man that reminds her of not only what she’s lost, but what she has unwittingly gained. However, his very compassion and understanding of her in ways that she is barely able to comprehend are such an endearing quality that you can only hope for his continuing presence in her life. 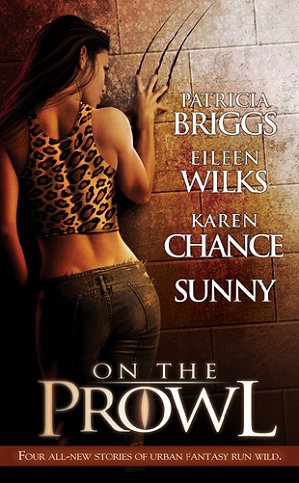 Alpha and Omega by Patricia Briggs
The werewolf Anna finds a new sense of self when the son of the werewolf king comes to town to quell unrest in the Chicago pack- and inspires a power in Anna that she’s never felt before.

Inhuman by Eileen Wilks
Kai has a secret gift of sensing thoughts and desires. What she senses in her neighbor Nathan could be dangerous. Because he has a secret gift, too, and it’s about to be let loose.

Buying Trouble by Karen Chance
In a New York auction house, a Lord of the Fey crosses paths with a fiery redheaded mage named Claire. But in this strange underground society, the rarity up for sale is Claire herself.

Mona Lisa Betwining by Sunny
Among the children of the moon, Mona Lisa is of Mixed Blood- part Monere, part human, and destined to be alone. Then she meets a man who could be her salvation- or her downfall.

I am absolutely in LOVE with this stunning collection of short stories. The strong women; unabashed way in which these four authors approach a woman’s sensuality and sexuality; and the fantastical worlds which are created through their masterful words create a series of spine-tingling stories that will leave you greatly anticipating just what happens next. Long after the last page has been turned, the characters float through my mind in an antagonising march of potent story-telling and rampant romance.

I’m a sucker for a good romance, and I love it even more when the woman is strong and independent enough to fight for herself, whilst still embracing the love with which they are presented. As a woman, the fine line between succumbing to love while still remaining strong and tough is a difficult one to walk. To create literary characters that embody this in a way that they appeal to a wider audience is immensely difficult, and the authors who contributed to this anthology show their supreme talents in being able to construct these characters.