Petty criminal Zara Cole was shocked to be recruited into the Honors, an elite team of humans selected by a race of sentient alien ships to explore the outer reaches of the universe as their passengers.

Zara seizes the chance to change her life, and when she meets Nadim, the alien ship she’s assigned to, she feels like she belongs for the first time. But nothing – not her Honors training or her street smarts – could have prepared her for the dark, ominous truths that lurk behind the alluring glitter of starlight.

This book is just so dang good!!! I honestly didn’t want to put it down and found it really hard not to leap for Honor Bound the second I finished this. I have a huge stack of books to read… but man was it still tempting. This was such a phenomenal beginning to a trilogy.

Zara is a fantastic lead. She’s feisty and has a seriously horrible past. And, the part that I found the most attractive? She’s rebellious as all hell. It gives her this fun edge and relatability that made me feel connected almost immediately. It also created a really good coming of age feeling to this story. As the story unfolds, Zara slowly comes into her own and finds her own identity.

I’m still fairly new to the Sci Fi genre as a general. And particularly, fairy new to the stories of sentinent ships in space. They do have a bit of a same same to them. But Cainr and Aguirre are able to add in this extra layer of mystery that is lacking in most of the other similar stories I’ve read. You know that there is a Big Bad out there somewhere… you just don’t know what or whom.

All in all, I absolutely loved this book. It was hard to put down, easy to relate to the characters and filled with twists and unexpected turns. The world building is phenomenal and the relationships help to further support this incredible reality that was created. This book was amazing and completely impossible to put down.

It’s a Space Gap Year. One that has some unexpected consequences and occurrences. But this will be amazing.

For starters, this short story is a great reminder to stop the “us versus them” crap. After all, it does nothing but damage everyone and everything involved. Something that we constantly need to be reminded of in my humble opinion. After all, we all have feelings, and that’s the important thing.

The space setting and Gap Year feeling throughout this story is fun. I never took a Gap Year, so the idea of one in space and the adventure that the lead characters go on… it was a lot of fun. There is so much future potential to this story! After all, their Gap Year is just beginning when this story ends.

Not only is this a fun little science fiction, coming-of-age story, but it’s also a wonderful story full of hints of romance. I love how Pryor is able to place out hints of the relationship that is developing, without bashing you over the head with it.

John is part of the surveyor town on Mars. But when the governing bodies continuously ask for more and more of their tithe, it might just be time to give up his pacifist ways and start a new way of life.

It took me a little bit to get really hooked into this short story. Mostly because there was something that I thought was really good on tv. But, in irony of ironies. I can’t remember what was on tv in that moment. But I can remember how much I actually enjoyed this short story. It just took me that first page or two to completely fall into the spell…

I love that the lead “cowboy” (space cowboy) in this story is constantly focusing on trying to be a pacifist. That it isn’t about violence, but just trying to live and let live. Of course, being a weird western, this didn’t quite work. But I did love that differentiation in character that you don’t always get. Particularly when his reflection on his family indicate that they are most definitely not the same in their proclivities.

This story was definitely one that focused on the idea of power and community. I love that, ultimately, the community joined together and won the day. Even if there was a little bit of violence, mostly it was about unification and everyone joining together in a fight for their own freedom and… well, community.

Welcome to Artemis. The first city on the moon. Population 2,000. Mostly tourists. Some criminals.

Jazz Bashara is one of the criminals. She lives in a poor area of Artemis and subsidises her work as a porter with smuggling contraband onto the moon. But it’s not enough.

So when she’s offered the chance to make a lot of money she jumps at it. Now all she needs to do is plan the perfect crime in one of the most dangerous places in the universe – and survive it.

Alright. I’ve heard the name Andy Weir multiple times over the years. And now I completely understand why I’ve heard such positive things! And why he’s so popular. Just because… wow. This book was amazing. It was phenomenal. It was funny. It was witty. And I absolutely adored reading this book… I plan to do so again and again and again.

One of the things I loved about this story was that it felt seriously realistic. It felt like there was a complete chance of Artemis being built on the moon. With all of the seedy complications and secrets which such a world entails. Somehow, Weir manages to mix science fiction and imagination with known science to bring about a great story that feels completely, totally and happily realistic.

There is something ridiculously fun about Jazz throughout this… no matter what she does. She seems to just get into more and more trouble. It creates this giant rollercoaster ride. Every time you think that she’s getting herself safe and the problem might be solved… she manages to get into a whole other kind of trouble. The only reason that fact didn’t take me completely by surprise… I could see how many pages of the book were left.

There are so many brilliant and witty one-liners in this novel. I spent a lot of time reading this out loud to my partner. Sharing those great lines and moments with someone who had no idea what I was reading. But, probably appreciated the humour that such simple moments throughout the story bought to our nightly rituals. Not only is this a fantastic adventure story set on the moon, but there’s also a slow unravelling of Jazz’s past that coincides with everything. Upping the stakes and pulling you even further into the beautiful story.

The moon landing is in jeopardy and the robots can’t fix it. How will the day be saved?

This short story was kind of reminiscent of Illuminae. Or at least, that’s how I found it. Space ships. Mysterious forces taking over. Robots. It was a fun little adventure. One that was just enough to give me a break in the middle of my studies.

I loved the fact that the lead man was a bit of an older one. One who thought that the battle would be won by the young. I loved that it didn’t end up that way.

This was an easy, short little read. There isn’t a great amount to say about it, because although it was fun, it also wasn’t earthy-shatteringly interesting or engaging. It was just… simple. Exactly the kind of story you need when you’re seriously stressed out. 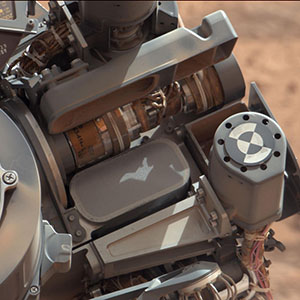 Mars has been in the media a lot lately, whether it’s because there are plans to fly people there in the next 20 years, or because of the chance that it may be hospitable to humans, The Red Planet has gained a lot of attention. And so it should, it is a fascinating planet and the next frontier of space exploration. But, how do we know so much about this astonishing place? Answer: The Mars Rovers.

Like most people interested in science, or who watch the news, we’ve all heard of ‘The Mars Rover’. But, before today, the majority of my knowledge came from Howard in Big Bang Theory…apparently you can get it stuck in a ditch up there… needless to say, beyond the idea that there were ‘cars on Mars’, it was pretty difficult to understand what each them actually did and how. I didn’t even know that more than one had been sent into space! 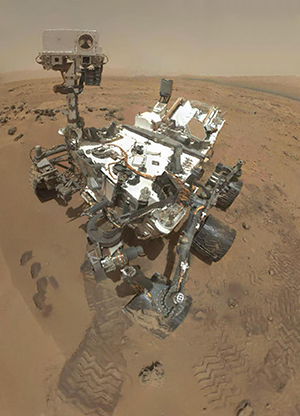 There have been four Rovers sent to Mars by NASA; the Sojourner, Curiosity, Opportunity and Spirit. Each has contributed to our knowledge differently and given us an insight into the astonishing Red Planet. Thanks to these Rovers, we now know what it would be like to walk on Mars, more about the planet’s formation and how hospitable it is for future colonisation.

The Sojourner was one of the first Rovers to land on Mars in July 1997 (two Russian Rovers arrived first). It was covered in solar panels, so that it’s night time activities were severely limited. But, more importantly, Sojourner, had three cameras; two black-and-white cameras in the front, and a coloured camera at the back. It is these that sent us back the first images of Mars.

The Sojourner is also featured in the book that is soon to become a blockbuster, The Martian.

No one has heard from Spirit since 2010. However, it did land on Mars in January 2004 and lasted over twenty times longer than scientists had predicted. It’s mission was supposed to go for 92 Earth days (90 Mars days or sols) and ended up functioning for 2695 Earth days (2623 sols).

Spirit collected samples from the surrounds to find out what the surface of Mars was made from. It used all of this information to:

Opportunity was the twin of Spirit and landed on The Red Planet three weeks later, in January 2014. But, unlike Spirit, Opportunity didn’t get bogged down in soft sand and is still sending information back to Earth. It has now spent 4160 Earth days (4049 sols) driving across the surface, collecting information.

Opportunity’s aims were the same as Spirit’s, but it has travelled over 40km (compared with the 7.73km covered by Spirit). Both Opportunity and Spirit have been sent images back to Earth as well as the meteorological data they collect. 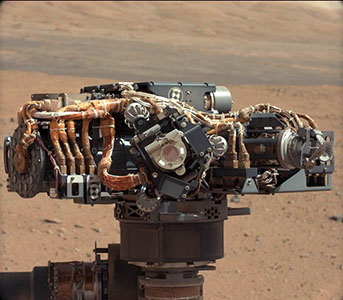 Curiosity is the latest Rover to be sent to Mars, it landed in August 2012. Its goals include:

In fact, Curiosity has eight goals, which can be separated into aims to investigate the biological, geological, planetary process and surface radiation. But the above are a really good overall idea.

Curiosity is going to be used as the basis for the next Rover to be sent to Mars in 2020. It is the largest Rover to be sent so far and has been able to gather some amazing information. The images throughout this article have also all been taken by Curiosity and have provided us with a window into what living on this planet would be like. 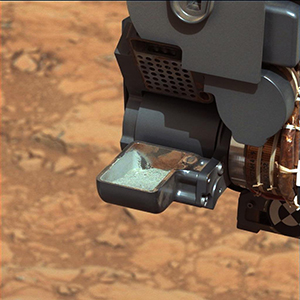 Simply doing research into these four Rovers has left me in awe of the amount of technology and data gathering equipment that can be attached to one vehicle. These amazing pieces of human ingenuity have allowed us to find out so much about a place that is ridiculously far from Earth. In other words, we know more about a place that is at least 225,300,000 km away than we do about the bottom of the ocean.