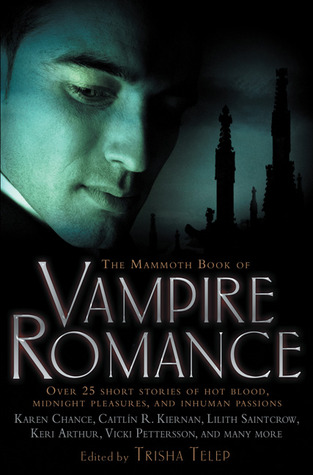 Title: Knowledge of Evil
Author: Raven Hart
In: The Mammoth Book of Vampire Romance (Trisha Telep)
Rating Out of 5: 4.5 (Amazing, but not quite perfect)
My Bookshelves: Dark fantasy, Paranormal romance, Vampires
Pace: Fast
Format: Short story
Publisher: Robinson
Year: 2008
5th sentence, 74th page: “What?” I was becoming intoxicated – the point at which I would be unable to stop drinking her blood even if I wanted to; the point at which if I were going to make her a vampire, I would have to feed her my own blood.

He’s a vampire who loves the pursuit of knowledge. She’s a vampire expert who is obsessed with having more time to find more information. Is this the perfect match, or something far more sinister?

I have a more-than-slight obsession with tales about intellectuals. I am an intellect. I’m obsessed with learning. And understanding. And just experiencing in general. So it was really fun to read a vampire romance that featured two such characters. Alright, the rest of the story was so incredibly cliché. And more than a little irritating in parts, but mostly, it was just fun to read about people who wanted to be immortal simply for the fact that it means a forever of learning.

I thoroughly enjoyed this story, but I found the ending a little too predictable and cliché. The couple ended up together, and he was way too smitten. It was a great story, but the ending did fall a little flat.