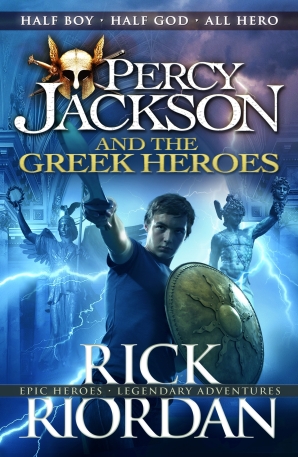 IF YOU LIKE MUTILATIONS, MURDERS AND FLESH-EATING FARMYARD ANIMALS, KEEP READING…

My name is Percy Jackson. I’m a modern-day demigod – the son of Poseidon. I’ve had some bad experiences in my time, but the heroes I’m going to tell you about were the original old-school hard-luck cases.

So get your flaming spear. Put on your lion-skin cape. Polish your shield and make sure you’ve got arrows in your quiver. We’re going back about four thousand years to decapitate monsters, shoot a few gods in the butt, raid the Underworld and steal loot from evil people.

Ready? Sweet. Let’s do this.

I’m fascinated by ancient mythology. And, as one of the most prevalent and well-known mythologies of the modern world, Greek mythology is normally at the top of my list. Which sometimes makes it a little difficult for me to read modern adaptations of the stories of Greek heroes. Especially in children’s books, as they have to be kind of PG, and I really like the originally, incredibly sleazy versions of the tales…

Having said that, I thought that Riordan did a great job of retelling twelve of the Greek myths. It’s a fine line between making it suitable for children and just twisting it out of all recognisable shape and form. Luckily for my enjoyment, and continued love of Riordan’s work, he toed this line perfectly. The stories were still PG, but tales like Hercules actually started with him going mad and killing his family. Unlike the Disney version which has him as an innocent child, forced to take on the mantle of hero. Don’t get me wrong, I love the Disney movie, but when you’re aware that this is probably a child’s first foray into the world of Greek Mythology… maybe sugar coating everything isn’t the way.

I loved the humour with which these tales are told. They’re Greek tragedies, not really any happy endings and generally pretty epic ways to die. So, being told by Percy’s persona throughout with such a healthy dose of humour made it a lot more enjoyable. And, somehow, a little less tragic.