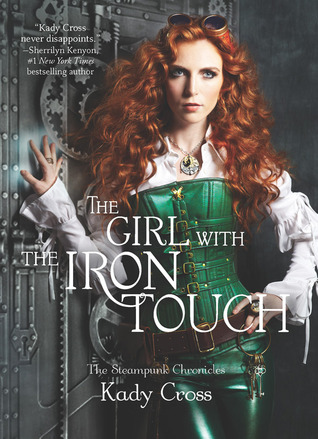 Title: The Girl with the Iron Touch
Author: Kady Cross
Series: Steampunk Chronicles #3
Rating Out of 5: 5 (I will read this again and again and again)
My Bookshelves: Steampunk, Strong women
Pace: Fast
Format: Novel
Publisher: Harlequin Teen
Year: 2013
5th sentence, 74th page: Regardless, she most certainly cannot look after herself.

In 1897 London, something not quite human is about to awaken.

When mechanical genius Emily is kidnapped by rogue automatons, Finley Jayne and her fellow misfits fear the worst. What’s left of their archenemy, The Machinist, hungers to be resurrected, and Emily must transplant his consciousness into one of his automatons – or forfeit her friends’ lives.

With Griffin being mysteriously tormented by the Aether, Finley turns to Jack Dandy, but trusting the master criminal is as dangerous as controlling her dark side. Meanwhile, Sam is searching everywhere for Emily. He would walk into hell for her, but the choice she must make will test them more than they could imagine.

To save those she cares about, Emily must confront The Machinist’s ultimate creation – an automaton more human than machine. And if she’s to have any chance at triumphing, she must summon a strength even she doesn’t know she has…

The more I read of this series, the more I love it, and the harder I find to put it down. Emily, Finley and the rest of the gang journey onwards in their battle to find their place in the world and seek justice. Yet, The Machinist’s legacy still haunts them, and it forces Emily to face up to her inner terrors and strengths. Some of Emily’s past has been alluded to in the preceding books, but it’s not until The Girl with the Iron Touch that it truly comes to light. Along with her immense capacity for love and strength.

Not only is there a lot of personal growth in the characters throughout this series, but there’s also great relationship developments. Emily and Sam have a great connection, but the depth of their love for one another isn’t really explored until this novel – it divulges far more of their thoughts and dedication. Finley and Griffin too find a way to progress in their relationship, even though there are still secrets and many layers of confusion between the two of them. There are even hints of a future love interest for Jasper in the presence of the Wildcat. It’s a little bit of a cliché, but also kind of nice that it seems as though each of the main characters have paired up. Or are about to…

Mixing a vivid, beautiful world with the battle of good versus evil, the supernatural talents of the characters and the technology of steampunk all jumps off the page. It not only makes it impossible to put down this story, but it helps to make an already thoroughly enjoyable storyline all the better. After all, it’s not everyday that you find a story that has great fashion, great characters, great settings and a great storyline.