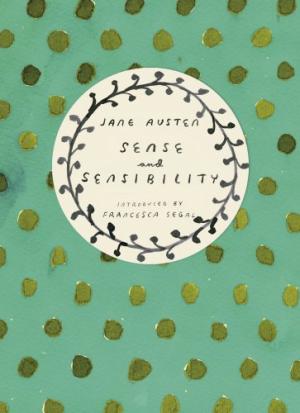 Title: Sense and Sensibility
Author: Jane Austen
Series: World Cloud Classics
Rating Out of 5: 5 (I will read this again and again and again)
My Bookshelves: Classics, Romance
Pace: Medium
Format: Novel
Publisher: Vintage Classics
Year: 1811
5th sentence, 74th page: They contained a noble piece of water; a sail on which was to form a great part of the morning’s amusement; cold provisions were to be taken, open carriages only to be employed, and every thing conducted in the usual style of a complete party of pleasure.

Elinor is as prudent as her sister Marianne is impetuous. Each must learn from the other after they are forced by their father’s death to leave their home and enter into the contests of polite society. The charms of unsuitable men and the schemes of rival ladies mean that their paths to success are fraught with disappointment but together they attempt to find a way to happiness.

I’ve read this novel twice now, and even on the second reading, I haven’t lost my pleasure or joy in following the Dashwood sisters in their journey to marriage. Although I am a strong believer in the idea that marriage isn’t everything (in this day and age), there is something thoroughly enjoyable about watching these two girls become women and attempt to find the man with whom they shall spend the rest of their lives. The contrast between the two under such similar circumstances only helps to promote this love as it is a great reminder of the contrast between myself and my sister.

Sense and Sensibility isn’t just about coming of age in a society that I can’t even begin to fathom, it is also about two sisters learning from each other and caring for one another. Marianne is completely driven by her emotions, she is unable to sensor herself, and speaks before she thinks. Yet, although wearing one’s heart on their sleeve seems to be an open and honest way of living, not withdrawing and thinking before speaking led Marianne into strife more than once. Yet, Elinor, her polar opposite is unable to truly grieve the potential loss of her beau, and holds her emotions inside so thoroughly that even her own mother is unaware as to the depth of her regard for another person. It isn’t until both sisters are able to control and show their emotions a little better, respectively, that they are able to find their happily ever afters.

Although I have read many, many, many, many books in the past, Sense and Sensibility has one of the most anger-inspiring villains. Mrs. Fanny Dashwood encompasses selfishness and an ability to manipulate others with a sense of right that is often ignored by her consciousness. Her constant interferences with the lives of Elinor and Marianne and her inability to let their brother (her husband) to do anything to assist them may not lead to all of the evils throughout the story, but she certainly helps them along. It is her ability to ignore what she knows is right that makes her spine-tinglingly maddening.