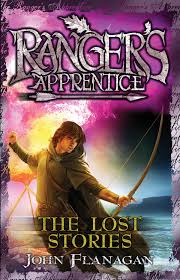 Ebony, Will’s dog, is captured and taken by a group of people known as Roamers. Together, Will and Alyss set out to find and rescue her.

Erak’s Ransom showed Will’s dedication to his horse, and The Roamers provided a great reminder of this – in the extent to which Will will go to rescue his dog. It is the ultimate display of affection between a man and his dog, the proverbial best friend – for both of them. Ebony is incredibly loyal and obedient (something that I still struggle to achieve with my dogs), and Will will do anything to protect her and keep her out of harm’s way.

There is a long tradition of gypsy folk (of whichever type and nationality) being suspicious of outsiders, and involved in a lot of different illegal actions, including theft. Flanagan uses this to build his story. After all, it makes a kind of warped sense, they steal to live, and are suspicious because of the results of this, which leads to more stealing and illegal activities. The Roamers are a reminder that the ostracised often turn to this, and that although there might be some good reasons for their actions, some in the group are just truly horrible human beings. Yet, when Will could punish and take revenge on such people, he decides not to, rather, he just prefers to shift them away from his home and the people under his protection.

With two dogs of my own (one of whom is going to be quite a big boy), the idea of dog fighting rings, and the theft that supplies them is one that often concerns me. I liked that it was incorporated into this story. It drives home the horrors and inhumanity of this illegal ring. Something that is more horrible than the simple act of theft.

3 thoughts on “The Roamers by John Flanagan”