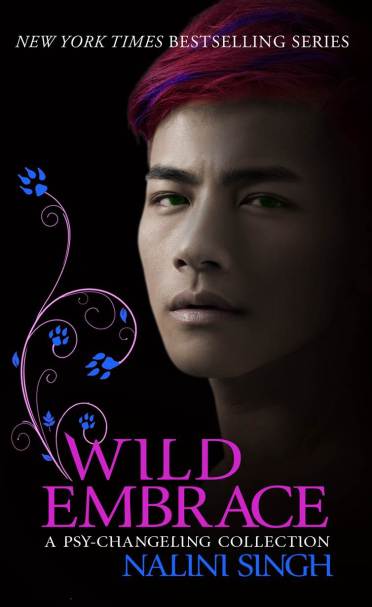 Title: Flirtation of Fate
Author: Nalini Singh
Series: Psy-Changeling #12.1, Psy-Changeling Season One #12.1
In: Wild Embrace (Nalini Singh)
Rating Out of 5: 5 (I will read this again and again and again)
My Bookshelves: Dark fantasy, Paranormal romance, Shapeshifters
Pace: Fast
Format: Novella
Publisher: Gollancz
Year: 2016
5th sentence, 74th page: It fed their souls, sootheed the animal that was part of their being.

Seven years ago, Kenji broke Garnet’s heart. Now the wolf packmates have to investigate the shocking murder of one of their own. And the more Kenji sees of the woman Garnet has become, the deeper he begins to fall once more. But even his primal instincts are no match for the dark secret he carries…

There were hints of Kenji and Garnet’s love throughout the last few books, Kiss of Snow especially highlighted their flirtations. But, since it was Singh telling the tale, the simplicity of flirting is the only easy thing about their courtship. It was thoroughly enjoyable to read about two people who seem to have been almost mated for years, but unable to make that final commitment. Slowly discovering just why that is will probably make you shed a tear – you’ve been forewarned.

Combining the entanglement of love and a complicated history with murder ensured that this slightly longer novella was an engaging read from start to finish. I couldn’t even put the story down to eat my dinner, much to my family’s frustration! Russ’ death, the ensuing investigation and the display of how badly love can be soured without acceptance of one another tended to take centre stage to Kenji and Jem’s dance. However, instead of taking away from their story, it only added to it, displaying both characters in a way that made you feel the depth of hurt between them and understand both of their actions. It is so simple to make one character the bad one in a relationship, whilst the other is inherently good, to display them both as loving, yet slightly insecure characters takes the talent that Singh has in bucket loads.