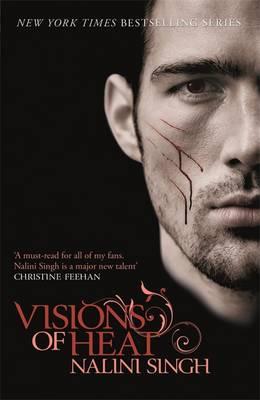 Title: Visions of Heat
Author: Nalini Singh
Series: Psy-Changeling #2, Psy-Changeling Season One #2
Rating Out of 5: 5 (I will read this again and again and again)
My Bookshelves: Dark fantasy, Paranormal romance, Shapeshifters
Pace: Fast
Format: Novel
Publisher: Gollancz
Year: 2007
5th sentence, 74th page: She was playing with a very interested cat and when that cat got interested in things, it didn’t like to be denied.

Used to cold silence, Faith NightStar is suddenly being tormented by dark visions of blood and murder. A bad sign for anyone, but worse for Faith, an F-Psy with the highly sought after ability to predict the future. Then the visions show her something even more dangerous – aching need & exquisite pleasure.

Visions of Heat left a tantalising hint of rejection in the air – something that helped to make the story all the more enticing. Although it is, in a way, obvious that Vaughn and Faith will eventually become mated, the idea that Vaughn could actually be rejected makes it impossible to put this book down. It also heightens the awareness of Singh’s amazing talent to create a story that will batter the senses and expand the heart. This fear also helped to make the eventual happy ending all the more sweet and tear-jerking.

Forsight is often ported as the epitome of special powers – being able to see into the future and predict what will happen would be invaluable in almost every endeavour of our lives. However, it is also potent with pain and suffering. Seeing the future and being unable to stop it, even though you are desperate to must be a special kind of hell. To withstand these glimpses into the future, a balance of practicality (and acceptance of the inevitable) and emotional strength must be obtained. Something which Faith finally begins to understand with the slow collapse of Silence.

Singh beautifully expands on the ideas of the PsyNet, the ways in which the Council have become monsters and the fracturing of the NetMind in Visions of Heat. The dual nature of hiding from one’s emotions is beautifully illustrated through Faith’s investigations, and the future repercussions of its fracturing are alluded to. It is within this story that Singh really starts to set up the upcoming storm on the horizon and filtering through the more complex tales which are to follow.

3 thoughts on “Visions of Heat by Nalini Singh”