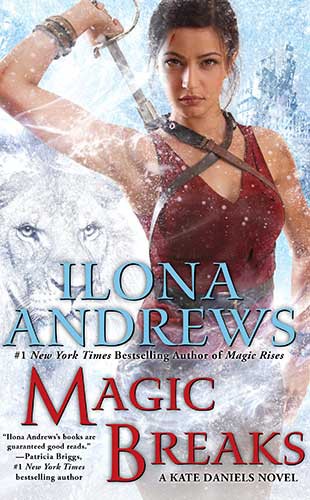 Title: Magic Breaks
Author: Ilona Andrews
Series: Kate Daniels #7
Rating Out of 5: 5 (I will read this again and again and again)
My Bookshelves: Dystopia, Paranormal fantasy, Shapeshifters
Pace: Fast
Format: Novel
Publisher: Ace fantasy
Year: 2014
5th sentence, 74th page: I don’t know if he bribed them, blackmailed them, or what, but he’s done something.

No matter how much the paranormal politics of Atlanta change, one thing always remains the same: if there’s trouble, Kate Daniels will be in the middle of it…

As the mate of the Beast Lord, Curran, former mercenary Kate Daniels has more responsibilities than it seems possible to juggle. Not only is she still struggling to keep her investigative business afloat, she must now deal with the affairs of the pack, including preparing her people for attack from Roland, a cruel ancient being with god-like powers. Since Kate’s connection to Roland has come out into the open, no one is safe—especially those closest to Kate.

As Roland’s long shadow looms ever nearer, Kate is called to attend the Conclave, a gathering of the leaders from the various supernatural factions in Atlanta. When one of the Masters of the Dead is found murdered there, apparently at the hands of a shapeshifter, Kate is given only twenty-four hours to hunt down the killer. And this time, if she fails, she’ll find herself embroiled in a war which could destroy everything she holds dear…

This isn’t the last book in the series; luckily. However, it acts as a bit of a midway point, a mid-end to the series. It ties up some character arcs and storylines and answers so many questions that it is actually a really safe place to pause reading the series in. Not that I would recommend pausing this series, but regardless, it is a great way to neatly tie up some lose ends. Andrews also managed to seriously surprise me with the way in which they did this – the conclusion was startling and took a turn which I never expected.

There were a number of conclusions to plot lines throughout the piece – Andrea takes her place in The Pack; Kate is forced to face her father and past; and their issues with the order are bought to a head.

There isn’t as much of Curran throughout this tale – he is elsewhere, and Kate is left fighting her battles alone. It’s kind of nice though, so many stories, once the couple couples up, there is always an us and a we, but the fact that Kate reverts back to being independent and kicking butt on her own is exactly what I wanted. Strong independent women are great when they’re coupled, but they’re even better when they are able to stand independently of their partner.