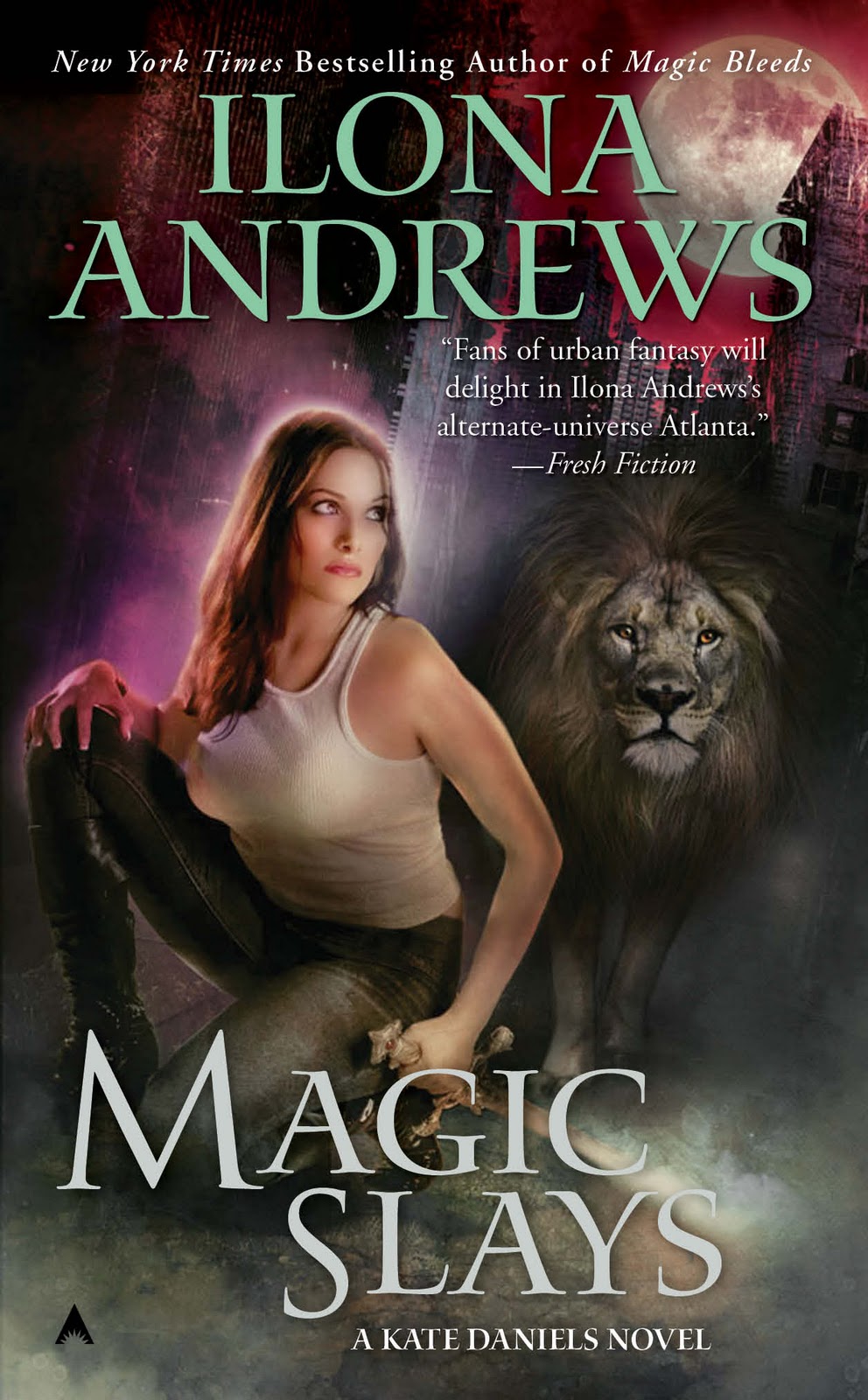 Title: Magic Slays
Author: Ilona Andrews
Series: Kate Daniels #5
Rating Out of 5: 5 (I will read this again and again and again)
My Bookshelves: Dystopia, Paranormal fantasy, Shapeshifters
Pace: Fast
Format: Novel
Publisher: Ace fantasy
Year: 2011
5th sentence, 74th page: And none of the gods from the Norse pantheon were strongly associated with ants.

Plagued by a war between magic and technology, Atlanta has never been so deadly. Good thing Kate Daniels is on the job.

Kate Daniels may have quit the Order of Merciful Aid, but she’s still knee-deep in paranormal problems. Or she would be if she could get someone to hire her. Starting her own business has been more challenging than she thought it would be—now that the Order is disparaging her good name. Plus, many potential clients are afraid of getting on the bad side of the Beast Lord, who just happens to be Kate’s mate.

So when Atlanta’s premier Master of the Dead calls to ask for help with a vampire on the loose, Kate leaps at the chance of some paying work. But it turns out that this is not an isolated incident. Kate needs to get to the bottom of it—and fast, or the city and everyone dear to her might pay the ultimate price…

Kate has slowly developed and changed throughout the Kate Daniels series, but it is in Magic Slays that this change is most obvious. At the beginning of the series she is prickly and difficult, and has no close people in her life. However, as she slowly lets people in, these walls dissolve around her. Andrews does this so naturally that it is easy to picture this character evolution, and this great character development was so gradual that it is difficult to pinpoint an exact moment in which this change occurred.

Part of this evolution comes in the form of Curran and Kate’s relationship. I love that although they are committed, the parameters of the bond are still being negotiated. Kate refuses to lose herself within his life and role, but, as in all relationships, a compromise must be reached. Their unique brand of sarcastic quips and stubborn refusal to meekly submit left me giggling out loud (not the best thing to do when you are sitting on the bus).

Kate also thaws a little in her relationship with Julie – although she has taken care of and showed her love for her ward throughout the other books, the lengths she is prepared to go to to save her are remarkable. I’m not ashamed to say that my heart skipped a beat, and my eyes leaked a little when I read how far she would go to save part of her small family.

Magic Slays, other than beautifully investigating Kate’s evolution throughout the series, also delves into the idea of ‘them vs. us’. The danger of having such a mentality in its ability to be turned against others (and leads to acts of atrocious inhumanity) is beautifully highlighted in the attempted slaying that takes part throughout the story. I loved the gentle way in which Andrews highlighted this issue, without completely ruining the storyline.