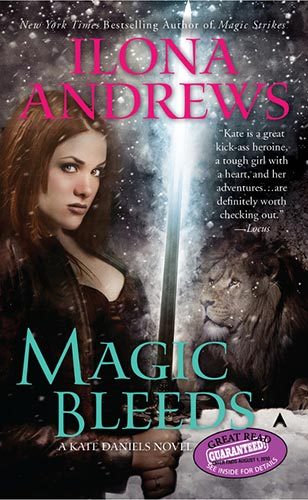 Atlanta would be a nice place to live, if it weren’t for the magic. When the magic is up, rogue mages cast their spells and monsters appear, while guns refuse to fire and cars fail to start. But then technology returns, and the magic recedes as unpredictably as it arose.

Kate Daniels works for the Order of Knights of Merciful Aid, officially, as a liaison with the mercenary guild. Unofficially, she cleans up the paranormal problems no one else wants to handle—especially if they involve Atlanta’s shapeshifting community.

When she’s called in to investigate a fight at the Steel Horse, a bar on the border between the territories of the shapeshifters and the necromancers, Kate quickly discovers there’s a new player in town. One who’s been around for thousands of years—and rode to war at the side of Kate’s father.

This foe may be too much even for Kate and Curran, the Beast Lord, to handle. Because this time Kate will be taking on family…

Finishing this book left me with an incredibly warm, fuzzy feeling. The storyline was beautiful and so many questions that I had from the previous books were finally answered, much to my relief. The underlying storyline throughout the series continues, but it moves forward and there is a whole new battle in the future. One that I, personally, can’t wait to sink my teeth into!

The slow leaking of information about Kate’s biological parentage, and the ways in which she was raised, is amazingly tantalizing and enthralling. Finding out more about such a fascinating and in depth back story has been thoroughly enjoyable throughout the first three books. The gradual leaking of information, whilst enjoyable, was starting to irritate me. Andrews’ revealing of Kate’s father and aunt was performed at a perfect time within the storyline – the revelation was amazing and I was still surprised at the reveal.

Kate’s aunt is also a fascinating insight into what Daniels can become if her future path takes her away from everyone and everything that she loves. I liked this contrast between characters and the foreshadowing of Kate’s potential future. Luckily, she chooses not to fall down this path, but it is a constant shadow looming over her decisions and an insightful way in which to explore the different paths that a character can choose.

Curran and Kate’s relationship further develops in this story. I love that although the attraction between the two is palpable, Daniels continues to fight it tooth and nail. Neither one is a simpering fool in love and unable to function without the other, they accept each other, flaws and all. To me, this is truly symbolic of a healthy partnership.