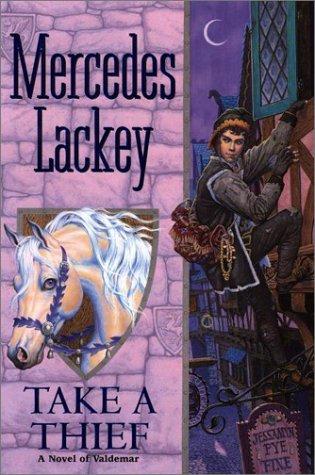 TO CATCH A THIEF

Skif was an orphan. For as long as he could remember he had worked as a drudge in his Uncle Londer’s dreary inn in the slums of Haven. Sleeping on a pile of rags under the stairs, wakened before dawn to do the lowliest and filthiest of tasks, Skif would have died from malnutrition and exposure if he had never met Deke.

Deke was a pickpocket. The oldest member of a group of young boys who, with the guidance of their teacher and leader, a crippled man named Bazie, survived by their wits and their nimble fingers. But Bazie was more than just the head of a band of young thieves – Bazie cared about the boys. Uncle Londer barely cared whether Skif was alive or dead. It was an easy decision for Skif to abandon his former life and throw in his lot with Bazie’s crew.

By the time Skif was twelve, he was an accomplished cat burglar and one of the leaders of Bazie’s gang. Light on his feet, silent as a ghost, small enough to slide between protective window bars, his “take” had evolved from silk hankies slipped from laundries and pockets to gold and silver jewelry stolen from “hidden” cupboards in affluent houses.

But it wasn’t until Skif decided to steal a finely tacked-out white horse, which was, oddly enough, standing unattended in the street, that this young thief discovered that the tables could be turned on him…

I loved the character of Skif from Lackey’s The Heralds of Valdemar trilogy. So it was such a pleasure to read more about his adventures and Choosing. I really enjoy how Lackey’s books continue to expand upon the stories of well-loved characters. This prolonged exposure is instrumental in my (slightly ridiculous) attachment to her characters.

Take a Thief showed a very different style to Lackey’s normal writing. I really enjoyed this change of pace. I found that although I normally love her books, they tend to be very dark and confronting at times. Skif’s tale, whilst it had some not-so-nice components (in Skif’s history and upbringing), it was a much lighter and more humourous journey. This perfectly reflected the mentality and personality of the main character. The ability to change her writing style and use it to reflect the characterisation of the chief protagonist is yet another thing that makes Mercedes Lackey one of my favourite authors.

I found Skif’s journey to becoming an apprentice Herald a really nice, light and easy to read tale. It was full of wit and humour, but it also showed how those who come from outside our world can sometimes have a very unique (and sometimes more correct) view of our interactions. This clear view of his new surrounds was what also allowed Skif to take such an important role in the events of The Heralds of Valdemar.

Lackey also introduces other characters, both good and bad that I first met in The Heralds of Valdemar, my literary experiences of them throughout this storyline may have biased me, but I think that Lackey beautifully foreshadowed their future actions.

2 thoughts on “Take a Thief by Mercedes Lackey”